The Choice and what comes after that

“Breen awakened. Breen became. Breen chose.
THAT was the story. Mission accomplished.
I cannot give each individual reader all they want. And I won’t.
I will tell you the story that comes to me, and work hard to make it the best I can. That’s my job. I can’t tie every aspect that every single reader wants up in a bow, and keep going and going. When it’s done, it’s done.”
Written by Nora Roberts on her blog as a reaction to readers’ demands to continue the story after the conclusion of The Dragon Heart Legacy series. 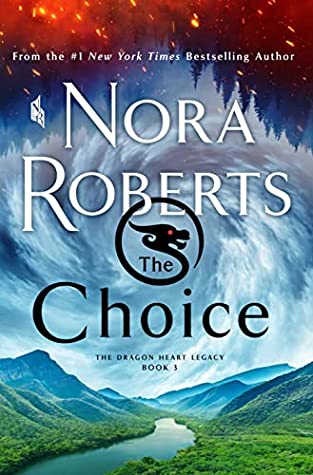 I have read The Choice, or rather galloped through the pages, for the book — a mixture of epic fantasy where the good Fey, dragons, and occasionally humans, battle against unrestrained evil, and a tale of two Americans building their personal and professional life in a picturesque cottage in Ireland. It was hard to put down until the very end. Faster than I wanted, I reached the end of the Epilogue, and… the lighthearted sensation I usually have after finishing one of Nora Roberts’ novels was not there. No cozy feeling that, at least in the stories, all that ends ends well, no smile as I leafed back through the pages to find and reread a scene that stuck in my mind. I ended the book feeling as if I was abruptly woken in the midst of a dream, then hurled into a different reality, with the dream, still unfinished, niggling in the back of my mind.

For me, this is an unusual reaction. Unable to work out what exactly bothered me, I checked the author’s blog, thinking there might be a discussion thread about The Choice. What I found was a response to some nastiness from unsatisfied readers, who apparently posted obnoxious demands and spoilers on Facebook. Mrs Roberts’ response prompted this post.

First, I want to make it clear that I’m not asking for another Dragon Heart novel, a novella, or a short story set in that world. The Choice is a compelling novel and I have nothing but admiration for the author’s imagination and skills. What follows is my attempt to understand my bizarre reaction to the book. At first, I focused on the ending: the story seemed to end too soon after the decisive battle, leaving me with a feeling that something was missing. I had no idea what this could be. The Choice is a powerful, fast-paced novel, where detailed exposition heavy on weddings and babies would be out of place. But as a reader, I’m used to the denouement that settles the nerves after the climax. The highlights of the day of the battle, however, did not bring the expected closure. Feeling petty and ungrateful, I tried to figure out ‘What’s wrong?’

The story resonated with me, but not because “Breen awakened. Breen became. Breen chose.” For me that was not the magic of the story. As with Harry Potter and Luke Skywalker (neither of whom was my favorite character in their respective sagas), the protagonist’s journey alone could not hold my attention for over a thousand of pages. It was the story-worlds I cared about, both our world and Talamh, their inhabitants, whose desires, conflicts and – especially in the last volume – their choices glued me to the books for so many hours. (Not a particular fan of fantasy, I don’t care how portals between the worlds work, how to conjure a pretty outfit or how to banish the guilty to another world.)

The frightening and, until I started to analyze them, unconscious parallels my mind created between The Choice and today’s reality were the crux of my problem. It might sound crazy. It’s certainly unfair. Nora Roberts’ post said that she had completed the manuscript in 2021. But in my mind I cannot treat the fictional war as a light entertainment, not in 2022. In the story world, people (human or magical) may choose the Evil God out of greed or religious fanaticism, because they seek an easy reward and a punishment for perceived slights. In real Earth, people may not have these choices. The freezing cold and the darkness are imposed by missiles one cannot fight off with swords. There is not always a place to hide from the destruction. In real Earth, there are other reasons than greed to cooperate, like staying alive and not seeing your beloved die. The most horrifying scene in the book was the attack on the dragons’ nests. I cried. Mrs Roberts is an amazing storyteller, known for evocative writing. This time, her fantasy brought back images from planet Earth. Published in November 2022, the novel echoed what I had seen and read in the news.

I didn’t have to read The Choice. In fact, I read it so fast, I didn’t connect between the real war and the fictional one until I started wondering about the lingering unease about the book’s abrupt end. Some of the strong impression it made is due to Mrs Roberts’ powerful storytelling, that predated the current war. And yet, at least in the end of the book, I wish there was some comfort and solace for those who wanted just a story and got more than they bargained for. I now know that Nora Roberts had finished writing the book in 2021, but the manuscript was prepared into the book in 2022. Many eyes read it during the process. Had anyone of those professionals felt that readers might be in need of extra compassion at this tumultuous time? I can only speculate, but I (probably naively) hope that someone had suggested to add a few comforting scenes after all the death and destruction the people of Talamh went through. Maybe something like the last chapter of the The Lord of The Rings, where Tolkien rounded up what happened to the Shire, to the protagonists and the less important characters. (Some of it was sad, and yet we could say goodbye not only to Frodo and Sam, but also to Merry and Pippin, to Bilbo, Galadriel and Gandalf. I’m sure that after reading it, no one was left with any doubt that the fellowship ended, but even though “The Days of the Rings” had passed, we had one last glimpse at Merry and Pippin riding with Sam homeward, singing again. There was some consolation that at the end of the day Sam gets what he wants most – to be at home with his wife and baby daughter.)

Ok, it’s about time to end speculations, to clarify again that Nora Roberts created a world and characters I cared about. In retrospect, I wish there were a few morsels of information about how these characters fared in the days, weeks (and months and years) after their battle was won, whether the characters changed after the ordeal, who healed and who could not.