The Stranger from Paradise, A Biography of William Blake

G. E. Bentley Jr’s biography of William Blake, The Stranger from Paradise, follows the creative life of a promising young artist, whose genius and unconventional mindset, both fueled his art and hindered his career. It recounts the growing rift between Blake and the art world, the emergence of his unique style and his unsuccessful attempt to reach the public directly. The last section (before notes and bibliography) is less extensive, as if the biographer was in a hurry to conclude the progressively unhappy story. It skirts around Blake’s poverty and declining health, focusing on the artist finding contentment and on the emerging interest both in Blake’s visions and in his paintings. When the book ended, I wanted to read more.

It is hard to imagine the times when Blake’s poetry and paintings were not famous. In BBC’s 2002 poll, he was placed at number 38 of the 100 Greatest Britons. And yet, “The Annual Biography and Obituary for the year 1828” summarizes his lifework quite prosaically:

“BLAKE, Mr. William, Aug. 13, aged 68. This excellent but eccentric artist was a pupil of the engraver Basire; and among his earliest productions were eight beautiful plates in the Novelist’s Magazine. In 1793 he published in 12mo. “The Gates of Paradise,” a very small book for children containing fifteen plates of emblems, and “published by W. B. 13, Hercules Buildings, Lambeth;” also about the same time, “Songs of Experience, with Plates ;” “America, a Prophecy,” folio, and “Europe, a Prophecy, 1794,” folio. These are now become very scarce. In 1797 he commenced, in large folio, an edition of Young’s Night Thoughts, of which every page was a design; but only one number was published. In 1805 were produced in 8vo. Numbers, containing five engravings by Blake, some Ballads by Mr. Hayley, but which also were abruptly discontinued. Few persons of taste are unacquainted with the designs by Blake, engraved by Schiavonetti, as illustrations to a 4to. edition of Blair’s Grave. They are twelve in number, and an excellent portrait of Blake, from a picture by T. Philips, R. A. is prefixed. It was borne forth into the world on the warmest praises of all our prominent artists, Hoppner, Phillips, Stothard, Flaxman, Opie, Tresham, Westmacott, Beechey, Lawrence, West, Nollekens, Shee, Owen, Rossi, Thomson, Cosway, and Soane….”

The obituary goes on, not only to detail Blake’s paintings, but to inform that “Blake has been allowed to exist in a penury which most artists – beings necessarily of a sensitive temperament – would deem intolerable.” Concise and unaware of how future generations would view the artist’s achievements, it doesn’t tell how Blake gained such a wide approval from the major painters and sculptors of his time, nor hints as to why the artist could not find employment that would pay for his daily needs. Bentley’s biography fills these gaps. Without casting blame or forwarding simplistic answers, it presents facts and perceptions, a chronological journey through Blake’s religious and artistic beliefs. The readers are assumed to have some knowledge about the American and French revolutions, for the biographer focuses on the artist’s response to the events. Alongside the effects of the world-shattering drama, he portrays Blake’s growing struggles to advance himself in a profession that relied on patronage and connections, setbacks caused by melancholy, and the scare of the artist’s trial for sedition. Without taking sides, the biographer shows Blake’s strained relations with former friends who succeeded where he stumbled, his nonconformity while attempting to adapt his designs and engravings to the commercial necessities which he abhorred.

Nevertheless, The Stranger from Paradise isn’t told by an impartial scholar. Blake is depicted as a visionary with unbelievable naivete and uncompromising integrity, a workaholic idealist whose incredible talent was unscrupulously exploited by publishers. The chapter titled “I’m Hid” opens with “In the nine years from 1810 to 1818, Blake was largely hidden from the world, so much that some wondered if he was still alive.” The biography shows how despite taking the brunt of merciless commercialism, Blake’s art survived, even thrived. Reaching the last chapter of Blake’s life, it skims over his deteriorating health and the dire effects of a lack of commissions, dwelling instead on contemporaries’ speculations about his visions and sanity. Despite the subject, this is one of the most gratifying parts of the book. It sheds light on how Blake’s work emerged from former obscurity during his last years. Blake did not sink lower and lower financially and mentally, but found contentment in his work, which proceeded due to generosity of people, most of whom were not rich.

The biography reproduces samples of Blake’s paintings and engravings and quotes from his poems, without entering into discussions about his art. Thankfully, professor Bentley focused on unfolding Blake’s fascinating story, and did not distract his readers with discourses, analysis, criticism, symbolism and such. He concludes with:

And if we are wise, we may learn from his life, as from his poetry, to understand the ‘Auguries of Innocence’:

“To see a World in a Grain of Sand
And a Heaven in a Wild Flower,
Hold infinity in the palm of your hand,
And Eternity in an hour” 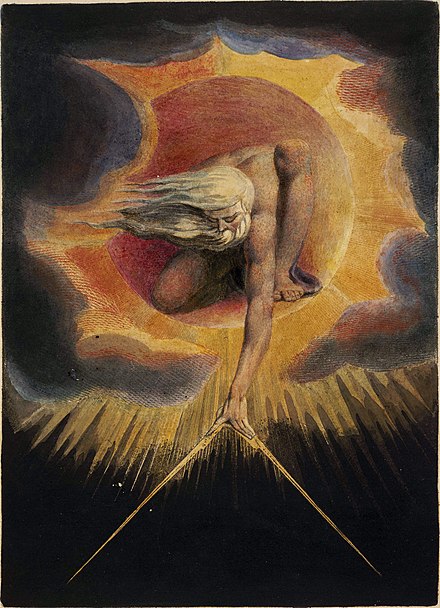 The Ancient of Days by William Blake