The proof is in the pudding 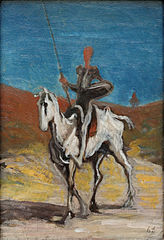 “al freír de los huevos lo verá”
literally ‎“you will see it when you fry the eggs”,
was translated as
“The proof of the pudding is in the eating”

A proverb from Don Quixote by Miguel de Cervantes.

Miguel de Cervantes was born in 1547, probably on September 29 (the day of San Miguel). His major work, Don Quixote, is considered to be the first modern novel. It is a classic of Western literature and is regarded among the best works of fiction ever written.

Little is known of Cervantes’s early education. He moved from Spain to Rome in 1569. By 1570, he enlisted as a soldier in a Spanish infantry regiment stationed in Naples, then one of the kingdoms of the Spanish Empire. In mid-September 1571, Cervantes sailed on board the Marquesa, a part of a large fleet formed of the combined naval forces of Venice, the papacy and Spain, to fight the Ottoman Empire. A fierce battle ensued. It ended in a crushing defeat for the Turks that ultimately broke their control of the Mediterranean. During the action, Cervantes, though stricken with a fever, refused to stay below and joined the thick of the fighting. He received two gunshot wounds in the chest, and a third rendered his left hand useless for the rest of his life. He always looked back on his conduct in the battle with pride.

Cervantes continued his soldier’s life until 1575. Armed with letters of commendation to the king, he set sail for Spain. Barbary pirates attacked and captured the ship, and Cervantes, together with his brother Rodrigo, were sold into slavery in Algiers. The letters Cervantes carried magnified his importance in the eyes of his captors. They raised his ransom price, thus prolonging his captivity. The letters probably protected Cervantes from punishment by death, mutilation, or torture when his four daring bids to escape were frustrated.

After five years spent as a slave in Algiers, Cervantes was ransomed and returned to his family in Madrid. He made a name for himself for courage and leadership among the captive community, but neither that nor his war record brought the recompense Cervantes expected. His applications for administrative posts in Spain’s American colonies failed. He became a commissary of provisions for the great Armada, traveling all over Andalusia, requisitioning corn and oil from grudging rural communities. It was a thankless, yet steady job, with a certain status. Failure to balance his books, however, landed Cervantes in prolonged and repeated trouble with his superiors. In 1594 he received an appointment to collect overdue taxes, a job no more rewarding than the previous one and similarly fraught with financial difficulties and confrontations. This appointment was terminated in 1596. In the summer of 1597 discrepancies in Cervantes’s accounts of three previous years landed him in the Royal Jail of Seville. He was confined until the end of April 1598. Apparently, he conceived the idea of Don Quixote while incarcerated there.

In summer 1604 Cervantes sold the rights of El ingenioso hidalgo don Quijote de la Mancha (“The Ingenious Hidalgo Don Quixote of La Mancha,” known as Don Quixote, Part I) to the publisher/bookseller for an unknown sum. The license to publish it was granted in September and the book came out in January 1605. The novel was an immediate success. The sale of the publishing rights, however, meant that Cervantes did not profit from the success of his novel.

In 1607, Cervantes settled in Madrid, where he lived and worked until his death. During the last nine years of his life, he solidified his reputation as a writer. He published a collection of tales, the Novelas ejemplares (Exemplary Novels) in 1613, the Journey to Parnassus in 1614, and Don Quixote II late in 1615. Cervantes died in April 1616.

Summarized from Britannica and Wikipedia