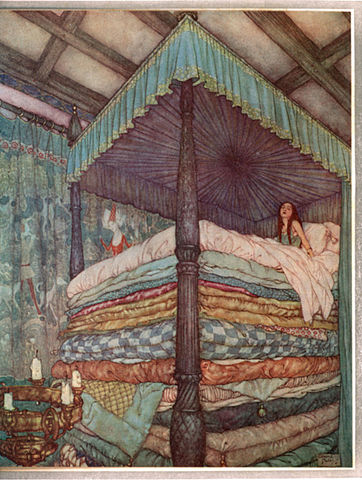 Water streamed from her hair down her clothes into her shoes, and ran out at the heels. Yet she claimed to be a real Princess.
“We’ll soon find that out,” the old Queen thought to herself. Without saying a word about it she went to the bedchamber, stripped back the bedclothes, and put just one pea in the bottom of the bed. Then she took twenty mattresses and piled them on the pea. Then she took twenty eiderdown feather beds and piled them on the mattresses. Up on top of all these the Princess was to spend the night.
In the morning they asked her, “Did you sleep well?”
“Oh!” said the Princess. “No. I scarcely slept at all. Heaven knows what’s in that bed. I lay on something so hard that I’m black and blue all over. It was simply terrible.”
from The Princess on the Pea by Hans Christian Andersen,
translation by Jean Hersholt (The Hans Christian Andersen Centre)

In the fairy tale, the Queen based her experiment on the hypothesis that only a true Princess is so delicate that she will feel “one pea all the way through twenty mattresses and twenty more feather beds”. A second, more recent tale, draws its hypothesis from Einstein’s one-hundred years old prediction about the existence of gravitational waves. In that tale, the pea is a cataclysmic event from a very distant past and the “mattresses” are the swath of space stretching over a billion light-years. For the sensitivity of the very delicate Princess stands “the most precise ruler ever constructed”, the twin sites of LIGO (Laser Interferometer Gravitational-wave Observatory). These two observatories were constructed to detect tiny distortions in space-time (strain), known as gravitational waves. One observatory is located in Hanford, Washington and the other in Livingston, Louisiana. The separation between their detectors (3,002 kilometers apart) is necessary to verify that the signals come from space and are not from some other local phenomenon.

Other differences? The event in the second tale did not happen over a stormy night. It lasted less than a second. But it will be remembered as the first direct detection of gravitational waves and the first observation of a binary black hole merger.

On September 14, 2015, a transient gravitational-wave signal, denoted GW150914, was observed by both LIGO detectors.

“The basic features of GW150914 point to it being produced by the coalescence of two black holes—i.e., their orbital inspiral and merger, and subsequent final black hole ringdown…The most plausible explanation for this evolution is the inspiral of two orbiting masses, m1 and m2, due to gravitational-wave emission.”
(from PRL)

The gist of the discovery, without physicists’ jargon, is explained in a short video Journey of a Gravity Wave. An article “Gravitational waves: A triumph for big science”, by Jonathan Amos, offers non-technical answers to questions such as “How can we have confidence that the detection is real?” and “how is it done?”

“The Princess on the Pea” ends with the Prince marrying the “tested” Princess and the pea being put in a museum. The tale of the double discovery is just the first chapter. “This detection is the beginning of a new era: The field of gravitational wave astronomy is now a reality,” says Gabriela González, LIGO Scientific Collaboration spokesperson and professor of physics and astronomy at Louisiana State University.

Soon, the Advanced LIGO won’t be there alone.