“If all printers were determined not to print anything till they were sure it would offend nobody, there would be very little printed.”
Benjamion Franklin, Apology for Printers (1730).

Benjamin Franklin, born on January 17, 1706, was a writer, printer, postmaster, scientist, inventor, statesman, diplomat and also (among other things) one of the Founding Fathers of the United States. Although he is famous as author, inventor and scientist, Franklin’s formal education ended at the age of ten when he was removed from school to help his father, a chandler and soap-maker. At the age of twelve, he became an apprentice to an elder brother, James, who was at that time a printer of a newspaper in Boston. Ben “seized every opportunity for reading books that he could borrow from his acquaintance, in which employment he spent the greater part of his nights. He soon began to indulge himself in writing ballads and other poetical pieces; but, it is said, that his father speedily satisfied him that this was not the species of composition in which he could excel. His next efforts were directed to prose composition, in which his success is well known, and duly appreciated.” (cited from colonialhall.com.) 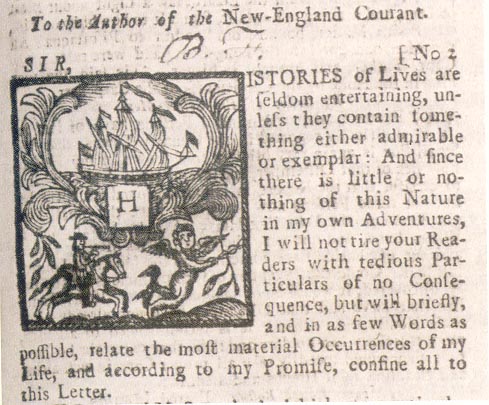 Denied the chance to publish his writing in his brother’s paper, 16 years old Ben adopted the pseudonym of “Mrs. Silence Dogood”, a middle-aged widow. Mrs. Dogood’s letters poked fun at various aspects of life in colonial America: drunkenness, religious hypocrisy, the persecution of women, hoop petticoats, and particularly ridiculed Harvard and its students. (see Silence Dogood). The letters were published and became a subject of conversation around Boston. James, however, was unhappy to discover that the popular correspondent was his younger brother.

At age 17, Franklin ran away to Philadelphia, Pennsylvania, seeking a new start in a new city. Of his achievements and colorful life, I’m going to mention a few concerning his writing and scientific discoveries.

As a writer, Franklin was best known for the wit and wisdom he shared with the readers of his popular Poor Richard’s Almanack, under the pseudonym “Richard Saunders.” In his autobiography, Franklin notes that he began publishing his almanac in 1732 and continued for twenty-five years. In 1758, the year he ceased writing for the Almanack, Franklin organized the adages and advice from Poor Richard’s Almanac into a speech given by “Father Abraham” to a group of people. Father Abraham’s Sermon, also known as The Way to Wealth has been translated into many languages and is the most extensively reprinted of all of Franklin’s writings.
(From Benjamin Franklin: In His Own Words).

In 1745 Franklin began to experiment with electricity. He devised simple—sometimes overly simple—explanations for the bewildering variety of electrical phenomena. Electricity, said Franklin, is a substance which is conserved, and which may be either “positive” (in excess) or “negative” (deficient) in a body. The electrical fluid or “fire” repels itself and is attracted to the substratum of “common matter.” Franklin proposed an experiment which would prove at the same time two exciting conjectures: that electricity is a powerful and universal force of nature, and that this force can be controlled. He suggested that a sharp point might “draw” electricity from a thundercloud, just as a grounded point will discharge a nearby charged object in the laboratory. This “Philadelphia experiment” was first tried in France with a tall pointed rod; it worked, making Franklin famous as the man who showed how to steal sparks from the lightning. A little later and independently he tried the experiment himself, using a kite instead of a tall rod (a dangerous activity, which later killed another experimenter).
(Summarized from American Institute of Physics)

Franklin’s electrical experiments led him to invention of the lightning rod to protect buildings from lightning. Following a series of experiments on Franklin’s own house, lightning rods were installed on the Academy of Philadelphia (later the University of Pennsylvania) and the Pennsylvania State House (later ‘Independence Hall’, see image on the left).

In 1753, Franklin was awarded the Copley medal for his kite experiments and the discovery that lightning is an electrical discharge. He was elected a member of the Royal Society, and also received the degree of M.A. from Yale and Harvard. He was appointed joint Postmaster-General.

As postmaster, Franklin became interested in the North Atlantic Ocean circulation patterns that affected shipment from England. Franklin worked with his cousin Timothy Folger, a Nantucket whaler captain and other experienced ship captains to chart the current. Franklin also gave it the name Gulf Stream. He published the chart in 1770 in England, where it was completely ignored. Subsequent versions were printed in France in 1778 and the U.S. in 1786.

Franklin published this map of the Gulf Stream, and his directions for avoiding it, in the Transactions of the American Philosophical Society in 1786. (Cited from Library of Congress)