“Folks that has brought up children know that there’s no hard and fast method in the world that’ll suit every child. But them as never have think it’s all as plain and easy as Rule of Three – just set your three terms down so fashion, and the sum’ll work out correct.”
from Anne of Green Gables, by L. M. Montgomery

Mrs. Lynde, the fictional character who made this observation about a hundred years ago, was a little-educated farmer’s wife from Prince Edward Island (Canada). Grumbling about her friend’s educational methods, she claimed that all children are different and that one should adjust instruction to suit each child’s individual character and needs. Since then, many parents and educators came to accept and promote an individualistic approach. Others claim that such an approach imbues children and young adults with a sense of entitlement. The expression “special snowflake” became a derogatory metaphor for a person convinced “that one (or often, one’s child) is, in some way, special and should therefore be treated differently than others”. Those who deride human ‘Special Snowflakes’ expectations, often point to the similarity between people and snowflakes. We, are all different, just like snowflakes, but the little variations existing between people are insufficient to make us special. Obviously, people are way more complex than snowflakes. Yet, even for snowflakes, a question arises: are they quite similar or unique?

Around the same time L. M. Montgomery wrote Anne of Green Gables, Wilson Alwyn Bentley developed a technique to film snow crystals placed under microscope. Bentley, who captured more than 5,000 images of snow crystals in his lifetime, argued that no two snowflakes were alike. 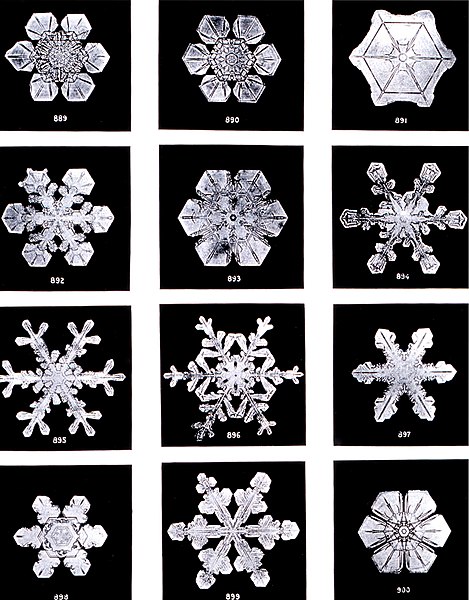 Looking at Bentley’s photos, it’s evident that although each snowflake is different, they all have a sixfold symmetry, also shared by honeycombs: 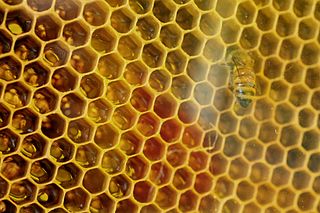 The reason is simple: snowflakes start as hexagonal ice crystals (a hexagonal prism with two “basal” facets and six “prism” facets). As the crystal seed moves within the cloud, water vapor condenses on its facets (sometimes more on the basal facets, sometimes more on the prism facets, depending on external conditions such as the temperature). A snowflake is tiny – all its arms experience the same conditions and therefore grow at the same rate. While this process accounts for the overall shape of the growing snowflake, it does not determine the intricate and beautiful patterns that make each snowflake unique.

As a matter of fact, one can generate the familiar snowflake shape by starting with an equilateral triangle. First divide the line segment into three segments of equal length (step 1), then draw an equilateral triangle that has the middle segment from step 1 as its base and points outward (step 2), and remove the line segment that is the base of the triangle from step 2. After several iterations, one gets Koch snowflake:

The obtained patterns are easily identifiable as snowflakes, yet they lack the diversity (let alone the uniqueness) of the real snowflakes. So, how do snowflakes develop, from pretty identical ice crystals, so that there are practically “no two snowflakes alike”?

In a nutshell, the answer is that snowflakes become unique because their “upbringing” is different, or more precisely, due to the ever-present variations in temperature and humidity they experience as they travel through clouds. In a paper titled “The enigmatic snowflake”, professor Kenneth Libbrecht explains:

“The complexity seen in a snow crystal ultimately arises from the way water molecules are transported to it. As a crystal grows, the surrounding air becomes depleted of water vapour, which must then diffuse in from afar. Water molecules are more likely to diffuse to a protruding point on a crystal, essentially because it sticks out farther into the surrounding humid air. This causes the protrusion to grow more rapidly than other parts of the crystal, which, in turn, increases the relative size of the protrusion. This positive feedback results in a growth instability that produces complex structures spontaneously. In particular, the instability is responsible for the dendritic branching and side branching seen in stellar snow crystals.”
Cited from The enigmatic snowflake

Going back to the “Special Snowflakes” metaphor, one wonders whether every snowflake is as exquisite as it is unique. Snowflake images displayed on Kenneth G. Libbrecht’s website, SnowCrystals.com, possess amazing symmetry and beauty; some of those photos were recently showcased on BBC Earth, in an article titled “One man has spent 15 years photographing snowflakes”. Looking at the images, a question arises: Are these snowflakes representative of the snowflakes’ beauty in general?

In Frequently Asked Questions section on his website, Libbrecht advises:

“Don’t be fooled by the pictures – irregular crystals are by far the most common type. If you don’t believe me, just take a look for yourself next time it snows. Near-perfect, symmetrical snow crystals are fun to look at, but they are not common.”

Curious to find more about snowflakes? SnowCrystals.com briefly explains what is a snowflake, how snowflakes grow and much more. The photographs on the site are of natural snowflakes – the ones that actually fell from the winter clouds (at locations including Alaska, Michigan, Vermont, Ontario and Sweden), and of designer snowflakes, which were grown in the lab under controlled conditions of temperature and humidity. Intrigued? Libbrecht published a non-technical article, titled “The Formation of Snow Crystals” in American Scientist (2007) and another, titled “The enigmatic snowflake” in PhysicsWorld (2008). Both papers are available on his homepage.

The photos on the top and the bottom of this post are from SnowCrystals.com.