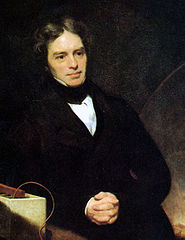 “You have the glittering beauty of gold and silver, and the still higher lustre of jewels, like the ruby and diamond; but none of these rival the brilliancy and beauty of flame. What diamond can shine like flame?”

The man who said these words during a Christmas Lecture, “delivered before a juvenile audience at the Royal Institution”, was born on 22 September 1791, in England. Here are some hints as to who he was:

I assume that by now it’s obvious that “he” is Michael Faraday.

“Although Faraday received little formal education, he was one of the most influential scientists in history. It was by his research on the magnetic field around a conductor carrying a direct current that Faraday established the basis for the concept of the electromagnetic field in physics. Faraday also established that magnetism could affect rays of light and that there was an underlying relationship between the two phenomena. He similarly discovered the principle of electromagnetic induction, diamagnetism, and the laws of electrolysis. His invention of electromagnetic rotary devices formed the foundation of electric motor technology, and it was largely due to his efforts that electricity became practical for use in technology.
As a chemist, Faraday discovered benzene, investigated the clathrate hydrate of chlorine, invented an early form of the Bunsen burner and the system of oxidation numbers, and popularised terminology such as anode, cathode, electrode, and ion.”
Text from Wikipedia

Faraday, however, was not only a great experimentalist.

“Since the very beginning of his scientific work, Faraday had believed in what he called the unity of the forces of nature. By this he meant that all the forces of nature were but manifestations of a single universal force and ought, therefore, to be convertible into one another. In 1846 he made public some of the speculations to which this view led him. A lecturer, scheduled to deliver one of the Friday evening discourses at the Royal Institution by which Faraday encouraged the popularization of science, panicked at the last minute and ran out, leaving Faraday with a packed lecture hall and no lecturer. On the spur of the moment, Faraday offered “Thoughts on Ray Vibrations.” Specifically referring to point atoms and their infinite fields of force, he suggested that the lines of electric and magnetic force associated with these atoms might, in fact, serve as the medium by which light waves were propagated…
By 1850 Faraday had evolved a radically new view of space and force. Space was not “nothing,” the mere location of bodies and forces, but a medium capable of supporting the strains of electric and magnetic forces. The energies of the world were not localized in the particles from which these forces arose but rather were to be found in the space surrounding them. Thus was born field theory. As Maxwell later freely admitted, the basic ideas for his mathematical theory of electrical and magnetic fields came from Faraday; his contribution was to mathematize those ideas in the form of his classical field equations.”
Text from Encyclopedia Britannica

To me, that explains why Albert Einstein kept a picture of Faraday on his study wall, alongside pictures of Isaac Newton and James Clerk Maxwell. Faraday’s quest for a unified theory still continues…

Image from A Visual Tour of Classical Electromagnetism.