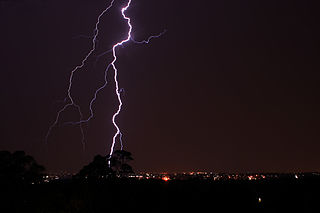 Can a charged particle moving through the atmosphere have a speed greater than the speed of light in the air?

I saw this question posted on Writers’ Cafe. After I ran a limited survey that got both “Yes” and “No” for answers, I decided to elaborate a bit on this topic.

According to the theory of relativity, the speed of light in vacuum (empty space), c, is the ultimate speed limit in the universe. Material particles can be accelerated to have mind-boggling kinetic energies, but their velocities will forever be smaller than c.
Air, however, is not empty space.
Light propagates in a transparent medium, such as water or air, with (phase) velocity c'<c. To be more precise, the light velocity in such a medium, c’, is given by c’=c/n, where n is the index of refraction in that medium.

In vacuum, c’=c and n=1. In air, n=1.0003.
The speed of light in air is c’=99.97% of c. Qualitatively, light propagates in the air almost, but not quite, as fast as in empty space. For a material particle to travel faster than light in the air, its velocity v should satisfy c'<v<c.

Every second, the Earth’s atmosphere is bombarded with Cosmic Rays. These are charged particles (mostly protons) originating from space. The speed of these particles ranges from a small fraction of the speed of light and up to about 0.999999999999c (see more at nasa.gov cosmicray)! For every particle that travels in air with velocity larger than 0.9997, the answer to the question above is definitely “Yes.”

Actually, most of the particles constituting the primary cosmic rays do not travel much in the air – they are either deflected by the Earth’s magnetic field or they interact with the air molecules in the upper atmosphere:

When cosmic rays interact with the Earth’s upper atmosphere, they produce cascades of secondary particles (these may include neutrons, kaons, pions, muons) and also emit Cherenkov radiation. Cherenkov radiation consists of photons emitted when a charged particle passes through transparent medium at a speed greater than the phase velocity of light in that medium.

Cherenkov radiation in air was first observed in September 1952. On a moonless night,

“two young researchers at the UK’s Atomic Energy Research Establishment went out into a field next to the Harwell facility equipped with little more than a standard-issue dustbin containing a Second World War parabolic signaling mirror only 25 cm in diameter, with a 5 cm diameter photomultiplier tube (PMT) at its focus, along with an amplifier and an oscilloscope. They pointed the mirror at the night sky, adjusted the thresholds on the apparatus and for the first time detected Cherenkov radiation produced in the Earth’s atmosphere by cosmic rays (Galbraith and Jelley 1953)…
… a decade after the initial pioneering steps by Galbraith and Jelley, the first operational air-Cherenkov telescope had been built, setting in motion a chain of events that would ultimately lead in 1989 to the observation of gamma rays from the Crab Nebula by Trevor Weekes and colleagues at the Whipple telescope in the US.”
From CERN Courier

Image of Cherenkov telescope from www.cta-observatory.ac.uk