An anniversary of an experiment that transformed the world 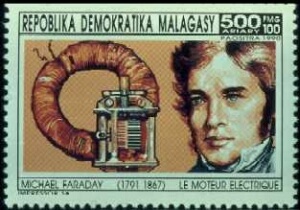 Two hundred years ago, the relationship between magnetism and electricity was not an established fact. It had been known that thunderbolts created certain magnetic effects, but there was no proof that magnetism and electricity were related, until 1820, when Hans Christian Ørsted demonstrated that changes in electric current flowing in a wire produced a change in the orientation of a compass needle. In the experiment credited with the discovery of electromagnetism, Ørsted observed that at the moment an electric current from a battery was switched on, a nearby compass needle was temporarily deflected from its stable position of pointing towards the magnetic north. The needle also moved when the electric current was switched off.

Within months after Ørsted discovered that the change in an electric current (from none to flowing, and vice versa) produced a temporary magnetic effect in its vicinity, André-Marie Ampère showed that each of two parallel current-carrying wires, placed close to each other, generated magnetic lines of force. The force caused the wires to be attracted or repelled from each other depending on the relative direction of the currents flowing in the wires.

After Ampère and Ørsted established that electricity could be converted into magnetism, scientists tried to do the reverse: to create electricity from magnetism.

The first to succeed was Michael Faraday. On 29 August 1831, Faraday made one of his greatest discoveries, in which he demonstrated generation of electricity in a wire by means of the electromagnetic effect of a current in another wire. He used an “induction ring” which he made from insulated conducting wire wound around a wooden cylinder as a helix. The helix was covered by a layer of muslin, then a second conducting wire was wound on top of the muslin. Faraday repeated the process of adding insulated coils several times, then connected the free ends of all the even coils to make one continuous length. He did likewise with the odd coils. Having two helices, he connected the ends of one helix to a galvanometer (a device invented a few years earlier to detect the presence of an electric current) and the other to a voltaic battery.

Although the effect was very small, the galvanometer needle was deflected one way upon switching the battery on and the other way when disconnecting it. This effect is known as electro-magnetic induction – changes in the electric current in the first wire, and hence the magnetic field produced by it, induced a current to flow temporarily in the second wire.

For an overview of early research in electromagnetism, see the article “The birth of the electric machines: a commentary on Faraday (1832) ‘Experimental researches in electricity’”, from Pholosophical Transactions A, (2015).