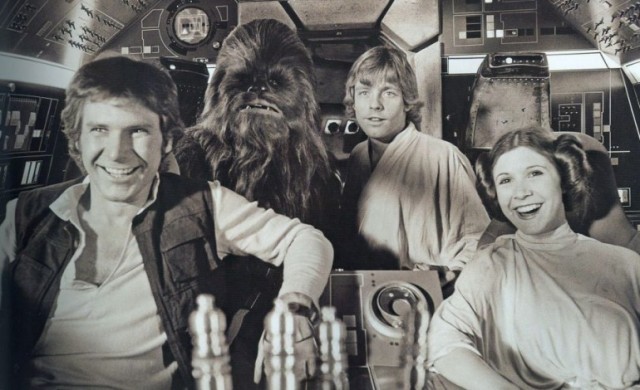 “I’ve spent so many years not telling the story of Harrison and me having an affair on the first Star Wars movie that it’s difficult to know exactly how to tell it now. I suppose I’m writing this because it’s forty years later and whoever we were then – superficially at least – we no longer are now.”
From The Princess Diarist by Carrie Fisher

Forty years is a blink in terms of intergalactic travel, but on Earth, most people were not born when the first Star Wars movie was released (the world population has grown from about 4.2 billion in 1977 to about 7.4 billion). Still, listening to George Lucas and the movie’s actors reminiscing about casting and filming at the movie’s 40th anniversary celebration, it seemed that only a few years have passed. And when Harrison Ford smiles, despite the lined face, Han Solo comes to life once again. Yet, there was a big difference – Carrie Fisher did not take her rightful place on the stage with Lucas, Harrison Ford, Mark Hamill and Peter Mayhew. She was remembered, but the heartfelt tribute from George Lucas did not bring back Princess Leia’s face and voice.

Nothing can do that. Movies, books, none of them is a substitute for the living person. Even the memoir Carrie Fisher had written shortly before she passed away gives only a glimpse into what she experienced as a young actress who became an iconic princess:

“… I’ve spent the lion’s share of my life, starting at nineteen and continuing forty years on jauntily in the present, being as much as myself as Princess Leia. Answering questions about her, defending her, fed up with being mistaken for her, overshadowed by her, struggling with my resentment of her, making her my own, finding myself, keeping company with her, loving her…”

She wrote about being so insecure at the beginning of the filming of the first Star Wars, that she pretended to like Princess Leia’s hairdo:

“What do you think of it?” George asked me.
Now, remember, I hadn’t lost the requisite ten pounds and I thought any minute they’d notice and fire me before the film even started.
So, I replied, “I love it!”

And on being a girl in a dominantly male environment:

“…I was essentially the only girl at this party, and it would be more entertaining to have the only girl at a party completely off-her-ass drunk than not…
They kept pushing me to have a drink, and finally the people pleaser in me took over and I agreed to let one of the crew get me one.”

She answered the question “Why she was writing?”:

There were two reasons that I wrote the diaries, the first one being that I’d always written, since about twelve. It seemed to calm me, getting anything that might be chaotic behind the eyes onto the page in front of me where it could do me less harm…
The second reason I wrote them was that I couldn’t talk to Harrison. Basically about anything, but especially about the entity that was “us” – not that there actually was such a thing…”

Frankly addressed the fame that came so unexpected:

“Fame can be incredibly intense, and of course none of us had any idea that anything like this would ever happen…Suddenly this little movie needed no promotion. But because no one could ever have anticipated that, we ended up doing the junket anyway, which became a definition of overkill.”

“To be sure, though, I had a considerable amount of money in my early twenties. Wow! Then I didn’t have to think about such things. I could pay someone to make sure my bills were paid and my money was locked up tight and under no immediate threat of theft…
Two decades and a pilfering business manager later, I was out of money.”

And what she did to earn more when it became needed:

When I was initially approached about going to Comic-con, the giant comic book convention, I said, “I wouldn’t be caught dead at one of those has-been roundups.” But, as it turns out, I’ve been caught alive at those roundups often enough to wish I was dead.

Obviously, there is much more in the memoir, but for the 40th-anniversary I want to return to the quote in the beginning of the post. The Princess Leia we knew was a young woman. Can we accept that she also might have changed – superficially at least – during these forty years?
In Carrie Fisher’s own words:

“One little girl came by who’d been told she was going to meet Princess Leia; Imagine her excitement, that is, until she saw the new me.
‘No!’ she wailed, squirming her head away from the sight of me. I want the other Leia, not the old one.”

But the actress learned to accept it all, and sometimes was even grateful to her fans. Here is an example of a fan’s comment and Carrie’s response:

“Anyway – I wanted to tell you.” He shrugs, then adds, “Thanks for my childhood,” and walks off. Wow, what a thing to be given credit for, to be thanked for! Because he didn’t mean his whole childhood – he meant the good bits. The parts he escaped to. I’m grateful for those good bits he shared with me.” 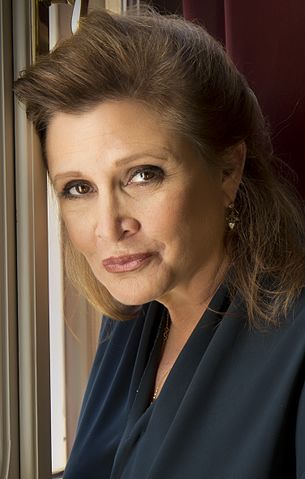 May The Force Be With You !