Who said it? Jude or Jane? 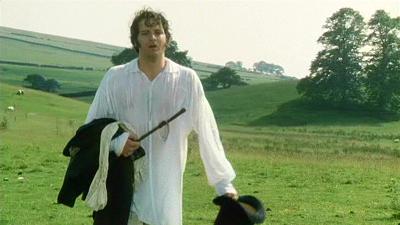 “Some people want to believe that the only difference between achievement and failure is luck. They like to sit on their couches and say that some sort of predetermined fate was why others made it and they didn’t. They never want to admit that hard work did it.”
From The Girl from Summer Hill, by Jude Deveraux.

“Her performance was pleasing, through by no means capital. After a song or two, and before she could reply to the entreaties of several that she would sing again, she was eagerly succeeded at the instrument by her sister Mary, who having, in consequence of being the plain one in the family, worked hard for knowledge and accomplishments, was always impatient for display.
Mary had neither genius nor taste… Elizabeth, easy and unaffected, had been listened to with much more pleasure, though not playing half so well;”
From Pride and Prejudice, by Jane Austen.

In the world of inherited wealth and privilege, working hard isn’t the best recommendation either for a young man or a woman. A “very fine young man, with family, fortune, everything in his favour,” does not need to work or even have a profession to be allowed to “think highly of himself.” The expectations from a gentlewoman are even stranger to our modern sensibilities. “A woman must have a thorough knowledge of music, singing, drawing, dancing, all the modern languages…and to all this she must yet add something more substantial, in the improvement of her mind by extensive reading.” And why would she make such an extensive effort? The only “career option” for a woman of certain social class was to attract a man who would marry and consequently support her. Sounds like a relic of a bygone era, not something relevant to the contemporary American society that glorifies hard work.

When I saw The Girl from Summer Hill, I didn’t have many expectations. But the cover was not entirely pink and the naked man on the back porch did not appear until the first sentence in the first chapter. The premise – staging Austen’s most famous novel in a small town in Virginia – was not something I read or saw before. Being in a summertime mood, I decided to try this modern retelling of Pride and Prejudice.

I started reading The Girl from Summer Hill on the same day I borrowed it from the library, read until 2am and finished the rest on the following day. Short chapters filled with a lot of snappy dialog make the book a fast read. It also helped that the novel is studded with revelations and twists. The novel revisits familiar situations from Pride and Prejudice, and the protagonists repeat lines from Austen’s dialog. Yet, the more I read, the more I became skeptical. Can two workaholic Americans turn into believable Elizabeth Bennet and Fitzwilliam Darcy?

Tate Landers is a sexy, successful actor and a new owner of a plantation that once belonged to his family. Unlike Darcy, he is a self-made man, who worked very hard to succeed. Another difference between the men – Darcy shunned the company of those he considered beneath him, but lots of money and fame didn’t spoil Tate. Although he guards his privacy at his ancestral home, Tate agrees to star in an amateur production of Pride and Prejudice along with local talent. He is a genuinely nice guy, one who is willing to go an extra mile to help deserving charities.

Casey Reddick is older and more experienced than Elizabeth Bennet. Whereas the Regency era virgin had never left the security of her family circle, Casey’s resume includes college, working as a chef in a famous restaurant, being burned out by the demands of the job, leaving it for a small town, where she makes a living as a local chef while connecting with her inner self and her newly discovered father and his other children. Casey is smart and pretty, but despite her many talents she lacks confidence.

Elizabeth, on the other hand, had an excellent opinion about her own wit and wisdom (at least until Darcy’s letter forces her to question her assumptions). Regardless of who she meets, Elizabeth never doubt her self-worth. She repeatedly spurns those who do not accept her as equal. Casey, on the other hand, keeps worrying that she is “fat” or that Tate would dump her. Many of her insecurities date back to the times she lived with her ex-boyfriend.

The dissimilarity between Tate’s and Casey’s financial resources, his fame and his adoring female fans, do not prevent Casey and Tate from falling in love. Since the happy end is a given, the focus is on the couple’s journey towards marriage.

For me, Casey and Tate are a far cry from Elizabeth and Darcy. They have their misunderstandings (Tate wants Casey to see the man behind the movie star, Casey is wary because Tate can get any woman he wants), they banter a lot on and off the stage. Witty lines, however, do not forge a memorable love-story. A large supporting cast and a plethora of plot twists are not enough to substitute for the protagonists’ internal struggle. Tate and Casey worked very hard to reach their professional goals. I was disappointed that their relationship did not get similar attention, that rewards kept coming without them facing the kind of hardships that Elizabeth and Darcy had to overcome. Tate, unlike Darcy, was accepted by the woman he wanted without having to change. Casey, unlike Elizabeth Bennet, was free to flirt and see where it goes. And that’s okay, for both Tate and Casey were nice, compassionate people to begin with. Their journey, however, could have been much more interesting if they met with real tests and challenges, and were forced to take risks and make life-changing decisions.

PS.
On her website, Ms. Deveraux refers to “a marvelous quiz” created by her publisher:

“Both the famed Elizabeth Bennett of Pride and Prejudice and the firecracker Casey Reddick of The Girl from Summer Hill have witty one-liners that stand the test of time. Can you guess who said which of the below quotes?

Looking at the seven quotes attributed either to Elizabeth Bennet or to Casey Reddick, I wonder whether the major New York Publisher employs someone to do fact checking. Some of the quotes are obviously said by men. Here is the screenshot of one quote:

The observation that “Next to being married, a girl likes to be crossed a little in love now and then. It is something to think of, and it gives her a sort of distinction among her companions” indicates that an older man said it. The acerbic tone is a clue that it was Mr. Bennet.

Actually, it was also said by a man. Only Mr. Darcy (before he reformed) could have said it: “That is exactly the question which I expected you to ask. A lady’s imagination is very rapid; it jumps from admiration to love, from love to matrimony, in a moment. I knew you would be wishing me joy.”