Raisin cake and the expanding universe

“By observing distant galaxies with the help of telescopes, nearly 100 years ago scientists discovered that our universe is getting bigger and bigger. The distances between the galaxies are constantly increasing, like the spaces between raisins in a raisin cake swelling in the oven. If we extrapolate backwards in time, we realise that this expansion must have begun about 14 billion years ago – in a primordial explosion that British astrophysicist Fred Hoyle called the Big Bang.”
Olga Botner, The Nobel Prize in Physics 2011 – Presentation Speech.

As you can see, physicists love to describe the expanding universe as a raisin cake. Here are two recent variations of the theme:

The Universe as a Fruitcake is a short video by David Kaplan that describes the leading cosmological explanation: 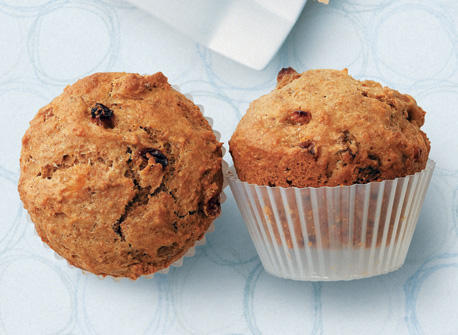 A raisin muffin figures in a conversation between Danielle and Chi, two postdocs at King Solomon University:

The muffins were snatched very quickly, and Danielle ended up grabbing one of the last left. She edged to Chi, who stood by himself, staring at two untouched halves of his muffin.
“Don’t you like raisins?” Her muffin was fresh and generously studded with blueberries. “I don’t think there are any blueberries left.”
“I don’t want another muffin.” Chi eyed the dark raisins. “My son nearly choked on a raisin cake.”
“Did he?” Danielle asked, her voice inviting Chi to go on.
“I used it to explain to my wife how the universe expands.”
Danielle smothered a smile. For some unfathomable reason, the sight of raisins in dough triggered in physicists a need to explain to non-physicists how the universe evolved. Usually they made an analogy between raisins and galaxies, and between the expansion of dough during baking and the growth of distances in expanding universe. Taking the entire cake to represent the universe, physicists used raisins to illustrate that faraway galaxies receded from each other during expansion, whereas galaxies’ shapes and sizes did not change.
“I once tried to explain to my great-aunt that gravitationally bound objects don’t expand while the space around them does,” Danielle said. Aunt Sophie, she recalled, did not care about the raisin-in-dough analogy, but she was scandalized by Danielle not knowing the difference between baking powder and baking soda. “How did your wife like the explanation?”
“I don’t know. Lei was with us, eating while I explained. Suddenly, he began to choke.”
“Did you take him to the emergency room?”
“No, it was not that serious, but he screamed and was very frightened. We could not understand why.” Danielle finished her muffin and waited for Chi to elaborate.
“Lei thought the pieces of cake would keep growing inside his stomach. My wife was angry long after he fell asleep.”
Expert from Initial Conditions

5 Responses to Raisin cake and the expanding universe