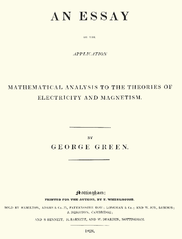 When one is asked to name prominent English scientists who forged our understanding of electricity and magnetism, the two giants that immediately pop to mind: Michael Faraday (1791– 1867), who established the basis for the concept of the electromagnetic field, and James Clerk Maxwell (1831 – 1879), who formulated the classical theory of electromagnetic radiation. (That theory unified electricity, magnetism, and light, showing that they are manifestations of the same phenomenon). The name of George Green (1793-1841), who was the first to attempt to devise a theory of electricity and magnetism, is usually forgotten. So, who was he and why would anyone care?

George Green was born on 14 July 1793, near Nottingham. Green’s father, a wealthy baker, recognized his only son’s mathematical aptitude and, having the financial ability, enrolled young George in Robert Goodacre’s Academy. At the age of nine, Green’s school days were over. He spent the next five years in his father’s bakery, then at fourteen he was apprenticed to his father’s mill manager. The next known milestone in George Green’s life was his becoming a member of the Nottingham Subscription Library at the age of thirty.

In 1828, at the age of thirty-five, Green published An Essay on the Application of Mathematical Analysis to the Theories of Electricity and Magnetism. In the essay for which Green is most famous today, Green generalized and extended the electric and magnetic investigations of the French mathematician Poisson, introduced the term potential and what is now known as Green’s theorem, which is widely applied in the study of the properties of magnetic and electric field potential.

We can only speculate what would be the impact of Green’s work if he published it through one of England’s established journals. Without academic qualifications and contacts with the scientific establishment, Green published it privately at his own expense. The Essay was sold on a subscription basis to 51 people, most of whom were friends and probably could not understand it.

Members of the Nottingham Subscription Library who knew Green repeatedly insisted that he obtain a proper University education. In particular, one of the library’s most prestigious subscribers was Sir Edward Bromhead, with whom Green shared many correspondences; he insisted that Green go to Cambridge.

In 1832, aged nearly forty, Green was admitted as an undergraduate at Gonville and Caius College, Cambridge. He graduated BA in 1838 as the 4th highest scoring student in his graduating class. Following his graduation, Green was elected a fellow of the Cambridge Philosophical Society. The next two years provided an unparalleled opportunity for Green to read, write and discuss his scientific ideas. In this short time he published an additional six publications with applications to hydrodynamics, sound and optics.

In 1840, an ailing Green returned home. He died at the age of forty-seven, just about the time when his work was about to be recognized.

After Green’s death, his Essay of 1828 was practically forgotten. It was rediscovered by William Thomson, the future Lord Kelvin. In 1845, Thomson showed Green’s Essay to leading French mathematicians. The Essay was re-published between 1850-1854. By 1900, Green’s functions were well known to German mathematicians. William Thomson did more than re-discover the Essay. He developed a life-long admiration for Green and did much to establish his posthumous reputation. He further developed Green’s theories in his own research in electromagnetism. His friend G. G. Stokes likewise developed Green’s work on wave theory in his own studies in hydrodynamics.

On a visit to Nottingham in 1930, Albert Einstein commented that Green had been 20 years ahead of his time. Green’s theorem and functions are important tools in classical mechanics. Schwinger used Green functions in work on quantum electrodynamics that led to his 1965 Nobel prize (shared with Feynman and Tomonaga). Green’s functions also proved useful in particle physics and in condensed matter.